While I was in Blackpool last week, my son Joe decided it was time to get some leaflets done to publicise  “Someday We’ll Understand“. 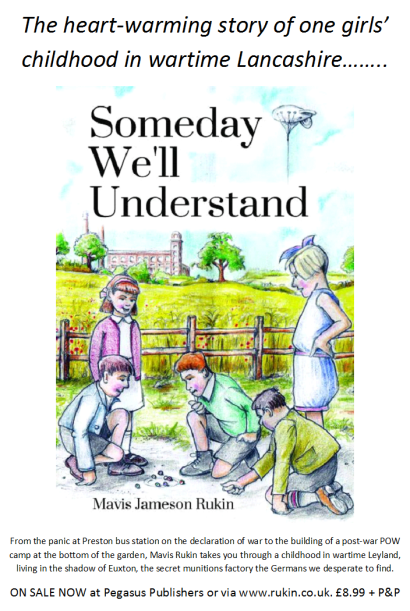 Probably the most important thing, (as it’s not quite in all the shops yet!) as it directs people to this blog to buy the thing is to say where you can get it…..

Obviously the place I’d like everyone to go to is Pegasus Publishers, because they are the people who’ve had the faith to publish my story. But they also recommend Barnes and Noble, Waterstones’ and The Book Depository.

Whilst I was grateful for Joe getting these leaflets done, I was a bit surprised that he said the book starts at Preston Bus Station, when I definitely remember it was Chorley Bus Station! This might be a forgivable if it wasn’t for two things; it’s on page one, and he edited the book……..

When I pointed this out, he said that he had absolutely no idea why he’d put Preston. He knew it wasn’t Preston, he’d always known it was Chorley. Then a few minutes later he said that he’d always had this image of Preston Bus Station in his head, even though he knows it now looks nothing like it would have done in the war. Even when he first read the book, he was thinking of Preston Bus station, for some reason.